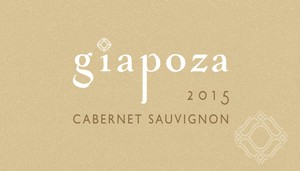 I am happy to say that we have just completed our newest wine project, Giapoza! Being a family owned and operated winery, we try to stress this theme by naming wine labels after our loved ones.  As a result, Giapoza comes from my first child, and daughter, Gianna.  However, we hit a speed bump getting there. The name Gianna was already used as a wine label. The wine industry is so large with the so many wines in the market, past and present, that many common names at one time or another have already been used. I was recently speaking with a friend of mine whose family has a new winery in Coombsville and, when creating the name for the winery, he was surprised by how many were already taken.  Eventually after much research on the many variations of Gianna or Gia, we centered on the combination of Gianna and Pozzan, thus creating Giapoza; dropping a “z” for the sake of symmetry.

Luckily, the difficulty of trade marking the name is over and we can focus on the winemaking. For now Giapoza comes in only 2 varietals, Cabernet Sauvignon and Pinot Noir. 1,000 cases made of each; they are California appellated wines that are meant to retail around $18. This is currently where we have a gap in pricing. Even though they are California appellated we decided to some Napa fruit in the Cabernet and Russian River fruit in the Pinot inorder to boost the quality. These wines will first be released in our September wine club, and be released to the public sometime thereafter.

Commenting has been turned off.